I explore this interior with the open eyes of death
The only one which can go further
Sparkling delirium
I will not give you names
What I feel is indescribable and unique
Victim and executioner take turns as lovers
Thousand pieces feed the floor
Enjoying or suffering: the now is spasm
Open carotid
Jewelry
Jorro
Self-contemplation
Come, with no mercy
To ramify the flesh, to exceed the senses, to dilacerate the speech, to ruin the image
The desire to be shadowy
The implosion plea
How to make a chair moan.

Performance art is the perversion of the body.

In this solo piece, Maikon K investigates the state of ecstasy as a dissolution of human identity, a body experience that breaks the boundaries of social conventions and moral codes. Ecstasy is one of the great taboos of our societies: regulated and controlled, it is a promise that is never fulfilled, contained in every product on sale, in the speeches of political and religious leaders, in the sex apps, in advertising, in aesthetics. Starting from immobility and a multifocal gaze, the performer activates a strange presence that modulates interior and exterior, control and uncontrol, drunkenness and intensity.

Excerpt from the critical text "Is this a factory or a dismantling?", by Anderson do Carmo, published in Conectedance.

Enter the room of spectacles located on the top floor of Alfaiataria [a multidisciplinary research and artistic space in Curitiba] to watch the new phase of the project "While we are human" is like entering a labyrinth of mirrors: the imaginary artifices architected there show nothing about the reality we take as an objective. They disturb the crystallized perception of what we call real.Maikon K (in Ecstasy Machine) and Michelle Moura (in Overtongue) build kinetic thrillers, part comic and part macabre, which are not closed when we leave the presentation space, but which remain affecting the body of those who watch.
[...]

It is like who reveals a buried secret that Maikon K performs Machine Ecstasy. The body is not what is buried, because it already shows itself monumental from the beginning. The body is a ruin from which secrets leak, drip, explode, spark. Maikon's body is a monumental machine that rust and collapse under the humid and viscous action of rapture. This rapture, this joy, this ecstasy, however, are not external phenomenons that affect the performer. They are something that, suddenly, can no longer be contained and begins to break its dam. The convulsing eyelids, the disturbed Adam's pommel, the spine that snakes are like smoke rising from the crater before the eruption of saliva that will cadence the performance. It is hypnotic the motor gear that is put into operation by means of mouth secretion: the fluid mainly responsible for facilitating the transport of food into the body, when converted into performative matter the spit that overflows from inside Maikon insinuates not a desire to swallow the world, but the intention to soak that world with that which is inside it.

In this sense, the proposed burial is a powerful image: something buried is something covered by something else. What is buried perhaps - and this perhaps is fundamental - has occupied the surface one day. However, from this other reality where the deep was surface, one cannot be sure, but only suppose, gather clues, imagine what it would have been like. Ecstasy Machine is that imagination incarnated.

The intense relationship that Maikon establishes with a chair - which from an object used becomes an extension of the body and of extended corporeity becomes a vestige of subjectivity - intensifies the understanding of ecstasy as overflowing from within and not as an invasion operated from the outside. In Ecstasy Machine, Maikon K establishes, in the confusion of those who act on what ( his body acts on the chair or chair starts to respond to the jouissance of the body?) images of dissolution of humanity such as those that the sculptor Gian Francesco Bernini pulls out of the marble in which he sculpts the ecstasies of St. Teresa and St. Sebastian; or those in which the photographer Robert Mapplethorpe registers with light and shadow the eschatological pleasures of anonymous people in the New York metropolis. Again a fiction/friction, here established in the attrition between the glorious and the infamous: Maikon does not make a profanatory exercise that maculates a specific universe of the sacred. What happens is the composition of an inventory of raptures, so many and so varied that they dampen those who witness them. In this damping operated by enthusiasm is that the work touches, with slobbering fingers, an open wound.

The constant raptures that increasingly cross the daily agendas are inevitable to remember: when small machines like cell phones - which index and collect more and more data from our subjectivity with our authorization - allow us everywhere and at any time to access sexual apps, evangelizing auditorium programs, pornographic videos, exorcism sessions, militant narratives, religious hallucinatory tourism scheduling, virtualized moral devasastation, capitalizing and commoditizing the very possibility of suspension of consciousness, there is no escaping the question of what will remain beyond the measurable utility in currency.

In the fabrication of this excess, in a residual aesthetics, in a politic of restlessness, the image of the serpent, so pregnant in Maikon, reappears in an unusual way: like a ouroboros, a snake that devours its own tail and confuses principle with end. Subject and object, body and chair, something that is penetrated and something that is swallowed, an interiority that soaks up the external and one from the visible outside that becomes a vestige of an invisible inside: it is overwhelming the dramaturgic capacity of Maikon K's piece to transform deeply intimate practices and discourses into allegory - in the same ancestral and futuristic measure - concerning the pain and delight of existing.

Ecstasy Machine and Overtongue activate a kind of self-archaeology, where the bodies of Michelle and Maikon are simultaneously scientist who investigates and site that is searched. The sound composed by Kaj Duncan David, the light of Nadja Naira, the space of Fernando Marés and the costumes signed by Faetusa Tirzah are powerful tools in this excavation, in that they do not operate as a frame that suspends the works as cut-out images; the sound and visuality that these artists materialize act in time and space that affects the body of those who watch as a secondary tremor, which reverberates the intense earthquake that occurs in the bodies of Maikon and Michelle.

As an epilogue, I take another paragraph in the understanding of ruin. The philosopher of art Walter Benjamin - much influenced by the intersection between sociology and architecture that his professor Georg Simmel articulates - develops, already under the shadow of fascism, the understanding of ruin as a construction of which one cannot be sure if it is being built or dismantled.

Nothing could fit better in this description than the very notion of humanity hard shattered by Michelle Moura and Maikon K. There is no certainty about the construction or dismantling of humanity, because to exist as such is a constant force field, tensioned by desire and repulsion in relation to the norm. If for some the fiction of humanity is a limitation from which one wants to depart, for others it is a right compulsorily denied. The bodily hypotheses that Overtongue and Ecstasy Machine materialize are powerful precisely for sustaining this tension and not surrendering to a binary romanticism that negatively or positively affects the human experience. One of the hypotheses is this: to be human is a fiction that one does not know if it is still in time to save or if it would be worth dynamiting all at once. What we do know is that we are so disgusted with it that it makes us enjoy it. And vice-versa.

*Anderson do Carmo is an artist and art researcher, doctoral student at PPGT-UDESC (FAPESC). He lives and works in Florianópolis (SC). 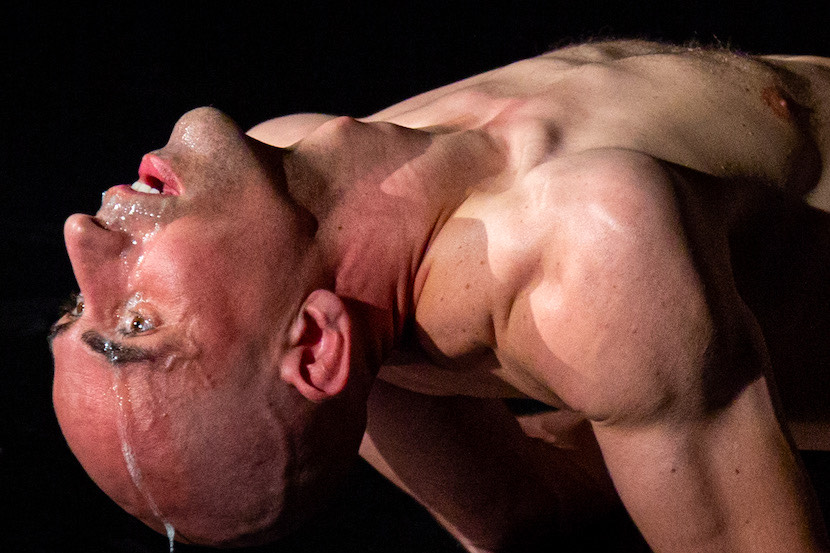 Performance art is the perversion of the body 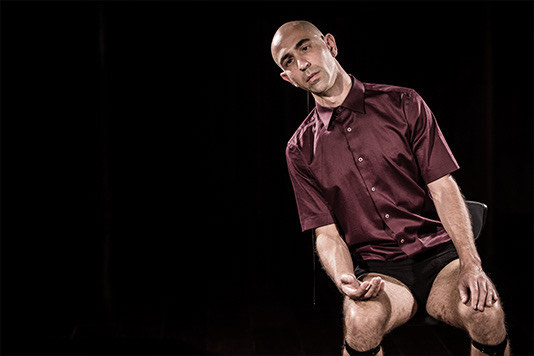 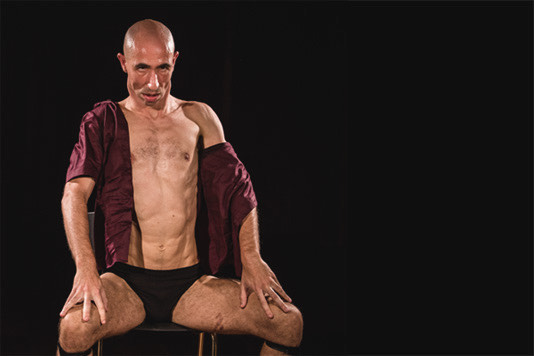 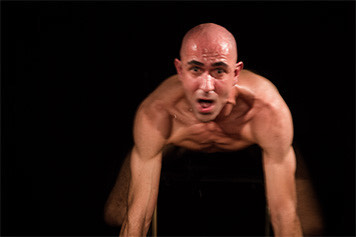 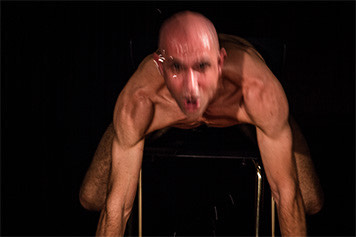 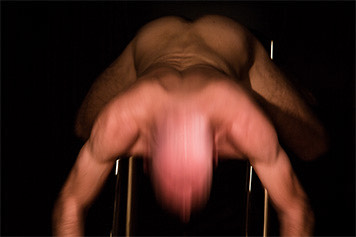 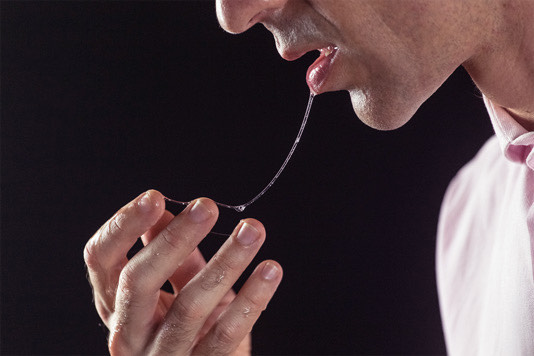