A terrarium is a container that recreates the necessary environmental conditions for a being to live, whether an animal or plant. At least one of its walls made of transparent material, which allows people to observe the behavior of the living beings inside. In this work, Maikon K begins with the body's relationship to mirrors, light and sand. A body overexposed to looks, multiplied in fragments and shards, split into endless reflections. A body that is shown and confined. Terrarium is about observing and being observed, though without being touched. Seeing your own image and not recognizing yourself.

The black cube puts the audience in the role of voyeur. We look through and inside, picking up pieces, bundles, sounds. In a world of webcams and instant photos, we capture, select and offer our image to a multitude of eyes. Image that spread without control, viral. We can communicate with the world from within our room, car, bathroom, prison. And the world comes to us, fiber-optic, absorbed by glazed retinas. We consume a world-picture, and we are consumed by it.

The performance is divided into two parts:

Prologue. The performer is standing and waits for the audience to enter. On the floor in front of him there is a surface made of pieces of mirror. At the back of the room there is a 3-meter high black cube. Maikon K performs a dance on the mirrors: erotic illusionism, biological manipulation. Subsequently, the performer enters the cube. This black box is lined with sand and mirrors cover the walls. A microphone is positioned on the ceiling and the sounds produced inside the cube are emitted on the speakers outside. The audience is placed in the position of voyeur, watching the performance through small windows and able to move freely and choose where they want to look, capturing pieces and reflections of the body moving within. The mirrored fractal enables the spectator to create different perspectives. In this shamanic peep show, the performer gradually builds a persona that emerges through his voice, breathing and movements. A game of mirrors where the public observes and is also observed. Contemplating the appearance and death of successive states and images.

TEXT ABOUT TERRARIUM BY ARTIST RICARDO NOLASCO (DIRECTOR, ACTOR AND PERFORMER WITH THE SELVÁTICA COLLECTIVE) - PUBLISHED ON 12/12/2015

I. In Terrarium (dance privée in an interdimensional portal) metamorphosis and reflection are presented as experience and not metaphor. The mirror doubles reality, making this an exercise of fiction. Flesh and image are manipulated not as illusion, but as possibility. Thus, Narcissus dances and manipulates his image instead of falling in love with himself. A single body, disobedient and androgynous that doubles the penis, triples the vagina, denies sex and fragments into dozens of shards, and does not wish to see its own perfection. It prefers error, deviation and rebirth. Osiris dismembered on the Nile.

Light, body and materiality transform like in a jigsaw puzzle where biology is manipulated. The unfolding of an instant that becomes infinite in spatiality. Maikon K presents the ephemerality of the performance, the metamorphosis, the reflection of his body in putrefaction and his ecstasy as that which he can offer to the world. The multifaceted ephemerality is his product, and he presents it as such to the sponsors and supporters. The performer moons the political situation that the country is experiencing: presenting subjectivity and irony as mystical weapons.

II. “Well, clear this out now!" said the overseer, and they buried the hunger artist, straw and all. Into the cage, they put a young panther.   Even the most insensitive felt it refreshing to see this wild creature leaping around the cage that had so long been dreary.  The panther was all right. The food he liked was brought him without hesitation by the attendants; he seemed not even to miss his freedom; his noble body, furnished almost to the bursting point with all that it needed, seemed to carry freedom around with it too; somewhere in his jaws it seemed to lurk; and the joy of life streamed with such ardent passion from his throat that for the onlookers it was not easy to stand the shock of it.  But they braced themselves, crowded round the cage, and did not want ever to move away. "

The environment we see is small and re-dimensioned by mirrors and lighting. This time, putting the audience outside the bubble, so that it can observe through small glass windows at eye-level, Maikon throws open the relationship between the work of art and expectation. The agreement is established and the joint responsibility is secured more than ever: looking at a body exposed to this sacrifice, we are not exempted from this hypnosis and rite, every mental process is one of self-knowledge. Glass, glass, sand, and dust body are elements that make up each other, the body of the performer is an alchemical board that transforms all of them. K returns to a tone present in works such as Guillotine, again producing a harsh criticism of the condition of the artist.

All money could be used for concrete measures such as the eradication of hunger or be diverted directly into the pockets of and pants of corruption, but it is here denouncing the actual structures of the show.

The show feeds off and kills the artist.

The show is everything that we can offer.

Pain and simulacrum: Nothing injures the performer or the audience, everything is prepared for the show.

After the telepathic intercourse comes a small death. Contemplate a living and beautiful creature made to serve the moment, contemplate a sacrificial rite of an artist-king. Temporary and total.

In response: the artist, infinite
Exchanging Entrails: Terrarium - dance privée in an interdimensional portal, a work by Maikon K, was presented at Estúdio 455 and ended its season this weekend. This text records the relationship between bodily inquiry involving spatiality and materiality, and the issues of a certain artistic context. By Francisco Mallmann - 15/12/2015‍

In response to the precariousness, the artist establishes a space in which the profusion of his image reaches radicalism - how many ways can the artist's body be seen, completely naked, on full display?

The art critic Antonio Gonçalves Filho, in a text published in the Folha de S. Paulo, on January 1, 1993 entitled "Painter performs ritual for the dead of Carandiru," which talks about a work by Nuno Ramos, states:

"With the modesty of an elegant lady who cannot stain her dress with the blood of social stillbirths, contemporaries have avoided contamination of so-called sociological art."

My interest in illustrating this occurrence and the critical record that succeeded it is to relate it somewhat to Terrarium - dance privée in an interdimensional portal by Maikon K - a work in which the depth of bodily/material inquiry is fused with a certain "sociology" that doesn't "stain the dress" simply because the body is naked, and it is the body that bleeds.

The last time I wrote about a piece of work by Maikon K., that is, Ancestral Body (read here), I did so from an anthropological perspective, referring to issues such as ancestry - and it still seems very productive to me to think about that which the artist presents by determining ways of seeing that include an anthropological reading, because the images he creates always seem to somehow establish a universe with an unknown cosmology that is being unveiled to the measure in which it is verticalized. There always seems to be movements that are not only an inversion of themes, such as gender, but the realization of pathways that result in the re-creation of reality with the proposition of new flows. This inventive character is present, once again, in Terrarium, which makes everything appear incredibly "new" and "unknown", so to speak.

My introduction may be somewhat uphill, however, I would like to recall the last work by Maikon K, which articulates and denounces the ways of producing art, together with opening up other ways of being/seeing, closely linked to bodily inquiry and the materiality that make up this environment of experimentation.

It is necessary for the artist to explain himself. It is necessary for the artist to thank the "sponsor company" and state institutions. It must be made clear where the money is - it needs to be clear that this is all about money. What makes Maikon K. is the revelation of the absurdity existing in the way of conceiving art, in a system in which the modes of operation are restricted to institutionalism that must be demonstrated quantitatively first and foremost.

It is this "sociological" character that is present here - the denunciation of an artistic context in which money reigns, plain and simple. The artist refers to a situation, albeit hypothetical, that is able to accurately portray the local art scene. The declaration includes criticism of sponsorship, the saga of fundraising, and the embarrassing dependence of artists in relation to public and private institutions.

In response to the precariousness, the artist establishes a space in which the profusion of his image reaches radicalism - how many ways can the artist's body be seen, completely naked, on full display? The eyes of the public embedded in the crevices of a big black box: inside, the artist experiments in contact with the sand and the sharp object that is the mirror. The mirrors create a horizon that is made of the body and goes as far as the eye can see. This is intimacy, the object of voyeurism: so near, and thus, so far. Touch is impossible. Nevertheless, we are invited to: "come with me" - the cameras will soon be turned on. 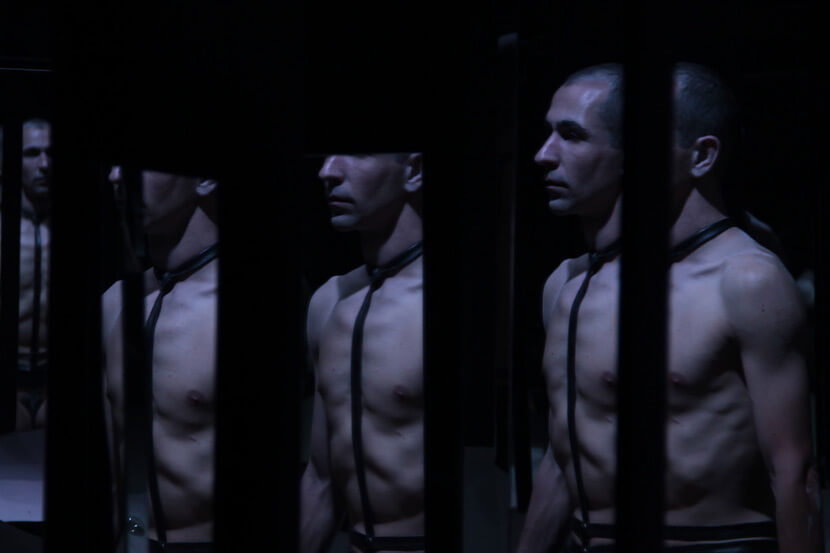 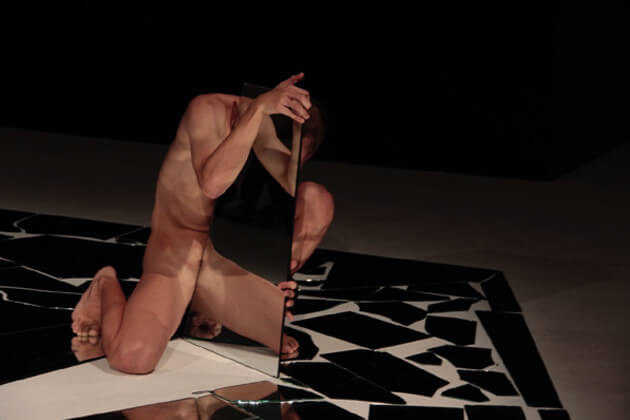 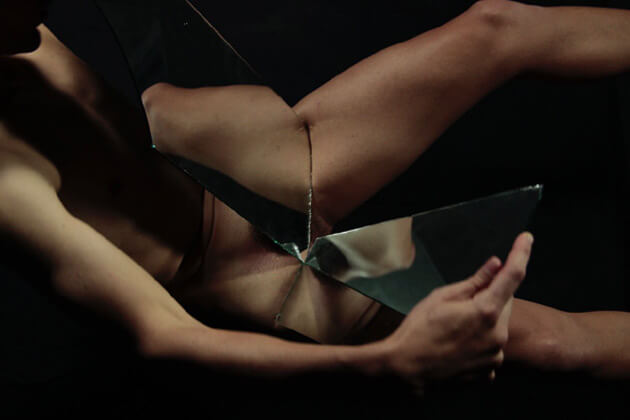 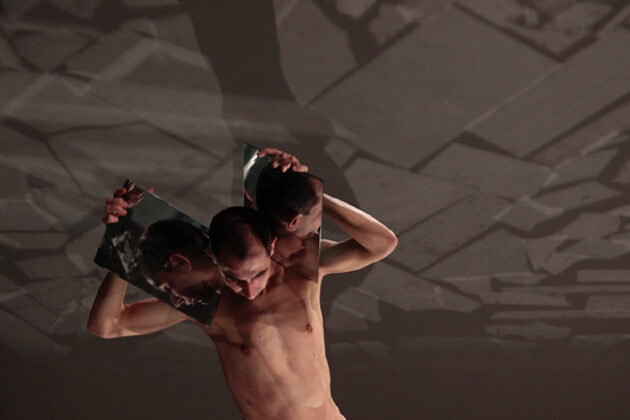 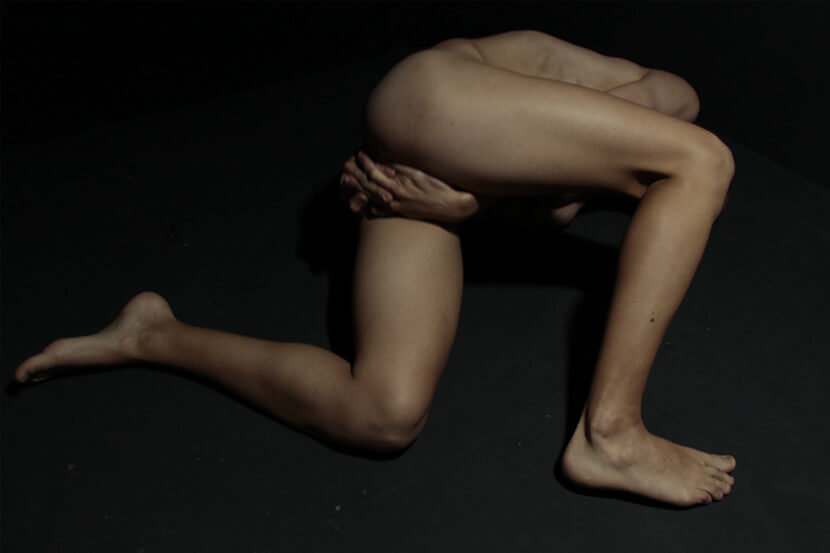 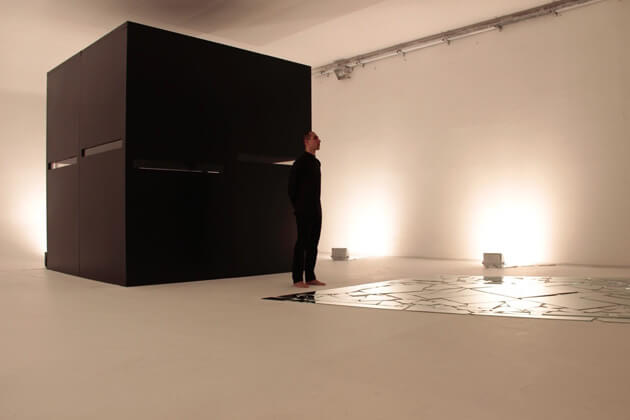 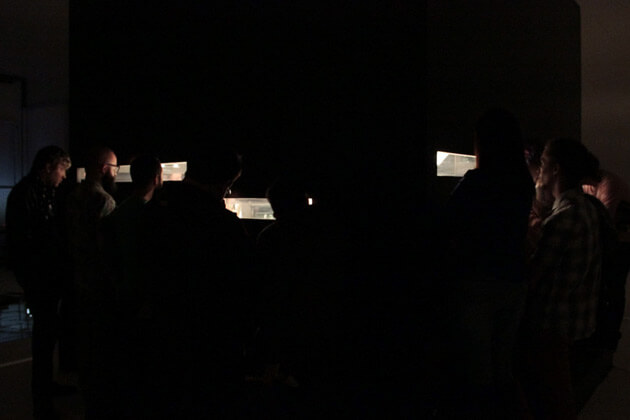 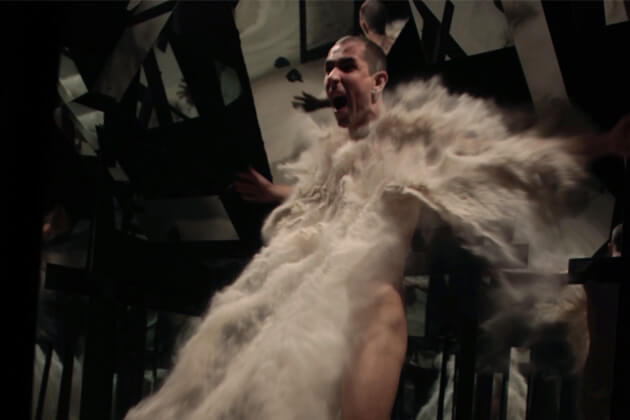 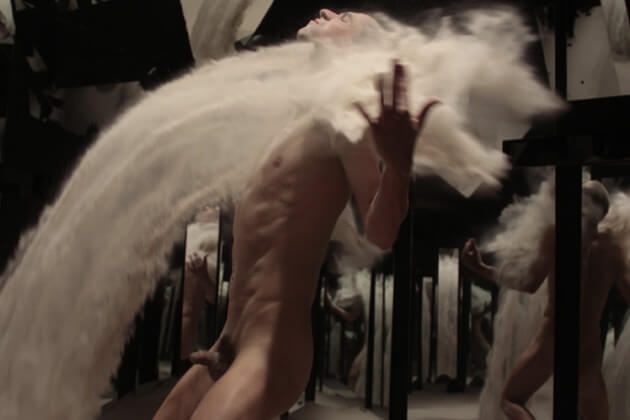 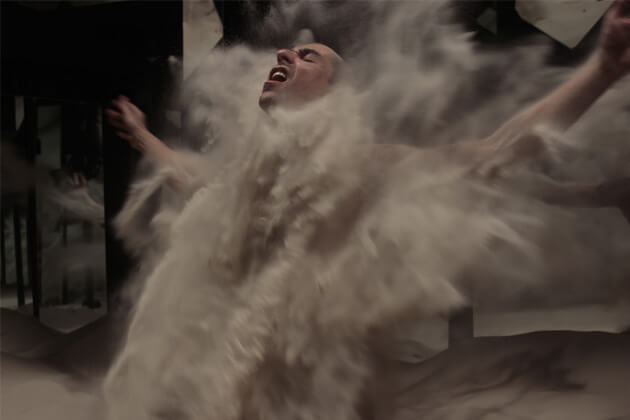 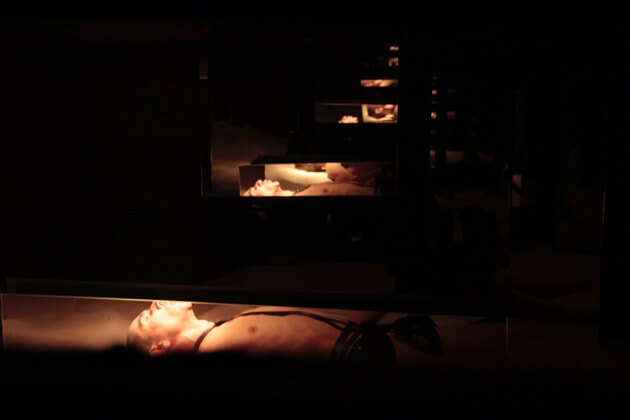